The dining suite is now quite advanced with the table assembled and finished and the chairs in the process of being glued up. This is almost the last stage as all the finishing is done ahead of gluing up. The chair is the design featured in the case study on the dining page of the website but in Oak with Brown Oak seat and back slats. The back leg to siderail joints are a double tenon with draw pegs, a traditional technique where holes in the mortice and tenon are drilled slightly out of alignment so that when a turned tapered peg is driven in the joint pulls up tight. A very satisfying and strong process. 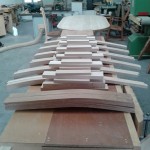 The image is of the chair components before the joints were cut. It is a challenge to produce a series of components that are consistent for a set of 6 or 8 chairs but a very pleasing stage to get to. The back slats at the front of the picture were laminated around a mould from 5mm strips.

When taken out of the mould they retain their shape while allowing a bit of spring to the back.